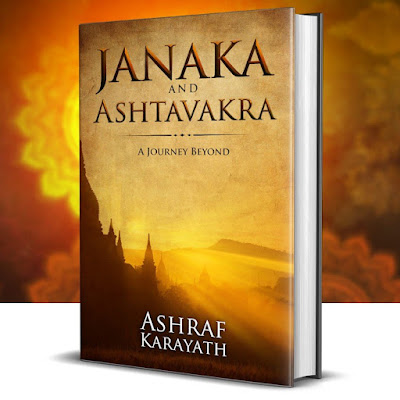 Janaka and Ashtavakra – A journey Beyond -

A Novel with a mission, by Ashraf Karayath

The ‘story’ begins when the illustrious King Janaka was undergoing experiences that are quite daunting: – how can he suffer such horrible circumstances when we all know that the world is ready, willing, and waiting for his command! Yes, it was a dream and he sat on his throne ruminating about it with a curious mind – Am I a king or a beggar?

Maya is the veil that covers everyone with a mystical shroud of inexplainable conundrums and opportunities. The king of Mithila has been waiting for a preceptor who would impart the wisdom he has been seeking all through his life. “A journey Beyond” by Sri Ashraf Karayath is a treat of a journey that everyone should partake in as a fresh air of wisdom that is the essence of Vedas and Upanishads. The knowledge has always been available for the seekers, but it stayed aloof to those who would not risk their ignorance for getting the knowledge-ultimate in return.  It is not for everyone to ponder such obscure callings. It is because the life they led so far has taught them to treat ignorance as real and they ‘know’ that there was nothing more to their life. King Janaka was of a different creed. He would not stop until the darkness of ignorance is dispelled by the light of wisdom. Yes, it was imparted to the King by the diminutive and ‘out of shape’ boy Ashtavakra – the one with eight types of deformities in his body. Those physical abnormalities symbolically betrayed his ability to show the men of wisdom his competence to tackle eight different avenues of knowledge at the same time, as an ashtavadhani.  In the end, Janaka’s darkness was dispelled, not by achieving anything new, but by realizing the truth which he already possessed, albeit unbeknownst to him. It was indeed a revelation; nothing more, nothing less.

Sri Asharaf has created a beautiful work of ‘fiction’ by incorporating the epitome of Indian philosophy of consciousness by taking us through the tribulations of a king as if he is a commoner – a commoner in his dreams and limitations, his problems, and vagaries of life.  Sita, his favorite daughter was a constant source of joy and companionship for him. They discussed politics, spirituality, and even the defense strategy of the country! Kushadhwaja, the king’s own brother was almost a son to him but caught up in the web of lack of confidence and misplaced loyalty, as it were. There was a retinue of advisors and preceptors on the king’s payroll, but they were of no avail when a ‘real’ problem started tormenting the wise king.

It took the young sage – Ashtavakra, with knowledge and maturity beyond his age who decided to venture into the wild world in search of his father, to impart the king with the clarity he has been yearning for. Ashraf’s portrayal of the life of the young mother Sujatha, who lost her husband because of this deformed son, is nothing short of a beautiful poem. No, he does not paint a picture of pity, but we find in her the strength of motherhood and all the integrity it carries as she imparted the right mix of confidence and clarity to this special son of hers. She sent him away for a mission and that mission became a wonderful door of opportunity for seekers everywhere.

King Janaka’s palace, which was under the spell of pessimism, and the threat of an impending war turned into a place of merry and joy momentarily just as the king’s dream of being a beggar ended and him waking up into the ‘reality’ of being the emperor he is. He had been having this thought – Am I a king or a beggar? As soon as Sri Rama came to Mithila with his retinue to lift and break the divine bow, all the doom and gloom disappeared from the palace. As soon as Ashtavakra imparted the jewel of wisdom, King Janaka’s confusion got dissolved. This is a process of dissolving the problem rather than resolving a problem that did not exist in the first place!

Ashraf paints a compelling picture of the concept of ‘Sankalpa’ as it applies to the creation of one’s own world. He has spared no theoretical details in expounding this philosophical treaty and those who are students of Vedanta would lap up the content with enthusiasm.  The episode of Sita Swayamavara happened after Sri Rama and Lakshmana killed the demons under Sage Vishwamitra’s command. Prior to that, Sri Rama got the wisdom to move in the world of plurality with confidence, from Sage Vasishta through Yogavasishtam – a wonderful lesson of reasoning and introspection. It is not a matter of coincidence that Ashtavakra’s philosophical discourse is quite in line with what Yogavasishtam propounds.

At times we see poetic moments brought up in conversation – one such instant includes a time when Janaka was able to behold and listen to the vibration of the hibiscus petal as a butterfly alighted on it while the wind carried a waft of fragrance along.  Although a ‘tall’ figure of knowledge and wisdom, Ashtavakra had to wait a few days at the doorways to the Palace of Mithila before he was allowed in. The doorkeeper relented on his own seeing the determination and confidence beaming from the diminutive sage’s gaze. “How can one stay so calm under insults and danger?”

The sage was able to knock off the notion of ownership and hierarchy of the king’s position in the society saying that ‘aha, so you are just a custodian of all these!’. Another Sankalpa shattered by the sage was: “the dream world or the conscious world which is really true?” was the King’s question and the answer were ‘both are untrue’. The classic ‘snake and the rope’ example has been included in the book with due care and it conveys the message amply.

The ‘fiction’ in the book is well portrayed with enough suspense and excitement that can captivate the reader. The potential for a coup to overthrow the mighty king by his own people, the king’s passive and sometimes pensive mood as observed by his own brother Kushadhwaja, Sita’s confidence and the assurance she gives to her father, the secret spiritual mission of the elite Saptarshi’s (of which Kahoda, Ashtavakra’s father is a member), Sita’s Swayamvara festivities, etc. make the ‘novel’ a wonderful read. One would have loved to see Ashtavakra and his mother Sujatha once again after having completed his mission at Mithila. Also, in the Ramayanas I read; King Dasaratha was never part of the Sage Vishwamithra’s team to enter Mithila along with Sri Rama when he broke the divine bow. Emperor Dasaratha came for the wedding after getting the news and invitation from Janaka afterward. But this deviation from the scripture has not made any dent in the story. The author could have used a professional editor to smoothen up some of the rough edges in writing and to avoid repetitions of certain words that are noticeable.

Posted by Sukumarcanada at 9:19 AM